And then there were three… 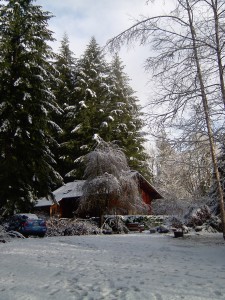 My mom's house, when there was snow.

No, not the Genesis album widely regarded as the beginning of their transition from progressive rock icons to pop-drecksters (though in the interest of full disclosure I did see them on that tour and thought they were fabulous).

Today the kids and I visited my mom. She lives in a cabin-like house, surrounded by forest on three sides and the Nehalem River on the other, just outside of Vernonia, Oregon. Vernonia is best known as a former logging community in the Coast Range which has had 2 “500 year” floods within 11 years, in 1996 and 2007. Both times the waters reached my mom’s deck, but did not enter or damage the house.

Our last several visits, the kids have really enjoyed exploring the woods that surround my mom’s house. Ashley, the dog, absolutely loves this. Ella has followed Sam’s lead in taking the approach of a scientific explorer–she still insists that she personally “discovered” a type of bright red fungi on our last major expedition. On that same walk (perhaps a year ago?), we noticed deer tracks, then deer droppings, and then finally caught up with the beasts themselves, 4 of them I think, just before it got dark.

This time, we spotted all the same signs, but not the hoofed browsers themselves. Ashley seemed to be particularly engaged, leading us on a path that consistently showed fresh signs–so we think she was pretty hot on their trail–until we reached an open area with a strong breeze and she clearly seemed to lose their scent. Not bad for a half-whippet, half-black lab whose only life experience in tracking probably came from dumpster-diving. (She was a rescue, picked up wandering the streets of Multnomah County.) We also encountered many examples of very interesting scat which appeared to be from some kind of omnivore–Sam reported that it contained both animal and vegetable remains. Our consensus was that it was most likely raccoon, but black bear was also deemed another possible source.

After a successfully negotiated encounter with a Jack Russell guard dog back on the road, Sam, Ella and Ashley raced down the familiar track of my mother’s long driveway through the woods, freed from the methodical pace of scientific discovery, wildlife pursuit and making sure we didn’t fall into one of the many creeks we crossed. (Of course, we did.) Rounding a bend, spying them in the dimming light and hearing their shouts echo off the trees, I had the impulse to grab my phone and hit the speed dial number for “Julie cell.”

“Damn it, you should be here! You should see this. Look what you’re missing!”